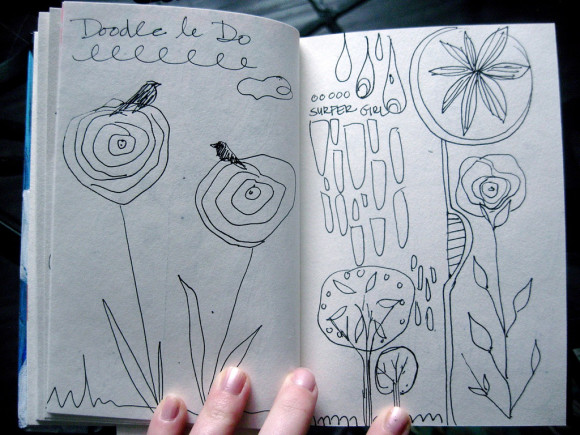 “Doodling is to make spontaneous marks to help yourself think.”~ Sunni Brown

Do you think that doodling is a waste of time?

Do you think that people who are doodling in a class or at a conference are just bored or simply being disrespectful to the speaker?

For a long time, doodling has been considered to be a time and productivity waster. However, doodling can be a wonderful way to stimulate your creativity and even understand and learn something new and stay focused.

According to Sunni Brown, co-author of GameStorming: A Playbook for Rule-breakers, Innovators and Changemakers, doodling, art and games can help some serious problem solving.

Brown has a problem with the perception that doodling is a waste of time. Brown spends a lot of time teaching adults how to doodle and take advantage of visual information at the workplace but she experiences a lot of resistance as expected.

People are resistant because doodling has a reputation of being non-intellectual and does not promote serious learning.

People are resistant because doodling has a bad reputation as a time waster and as being not beneficial.

“And naturally, I encounter a lot of resistance, because it’s considered to be anti-intellectual and counter to serious learning. But I have a problem with that belief, because I know that doodling has a profound impact on the way that we can process information and the way that we can solve problems.”

She considers doodling as a visual language that has a profound impact on our information processing abilities. Doodling is a pre-emptive method to avoid the loss of focus when we confront complex ideas and concepts. I find this very interesting because society usually associates doodling with a loss of focus and not the other way around.

Brown’s talk is also relevant for enhancing creativity because she believes that doodling has a great impact on creative problem solving and also the way we process deep information.

There are different modalities of learning with auditory, kinesthetic, reading/writing and visual being the major ones. Most of us fall within some or all of these categories when we learn and process information.

If we are to really learn new information and retain it, Brown explains that we need to engage at least two modalities at the same time or one modality with an emotional connection.

Brown explains that doodling is incredible because it engages all 4 learning modalities-auditory, kinesthetic, visual and reading/writing with the possibility of an emotional connection or feeling.

Doodling is invaluable since there is a lot of information coming through and the requirement is to process that information quickly and accurately.

If you look at children, doodling seems to be a natural source of cognitive learning and progression. Children are natural and enthusiastic doodlers but as we go through school, doodling is discouraged.

“So they did anthropological research into the unfolding of artistic activity in children, and they found that, across space and time, all children exhibit the same evolution in visual logic as they grow. In other words, they have a shared and growing complexity in visual language that happens in a predictable order. And I think that is incredible. I think that means doodling is native to us and we simply are denying ourselves that instinct.”

Instead of being eradicated and discouraged, Brown argues that doodling should be encouraged in the classroom and even at work. When there is need for complex information and the processing requirement is demanding, doodling can assist and should be leveraged.

What does the scientific literature say about the benefits of doodling?

Let us look at a study at the University of Plymouth by J. Andrade titled “What Does Doodling do?” It was determined that doodling, art and sketching can increase our understanding and comprehension of problems and also help creativity.

In the research study, forty subjects were divided into two groups and received a mock monotonous phone call. One group was allowed to doodle while the other was not.

The group that was allowed to doodle was asked to shade shapes that were printed out. The mock telephone message required participants to monitor the names of people coming to a party. Both groups were tested by a surprise memory test.

In order to reduce participant bias, both groups were told that the task was monotonous and boring. The group that was allowed to doodle was told that doodling was being offered to relieve boredom but no other explanation was given to decrease any bias. According to the author:

“Participants who performed a shape-shading task, intended as an analogue of naturalistic doodling, concentrated better on a mock telephone message than participants who listened to the message with no concurrent task. This benefit was seen for monitoring performance and in scores on a surprise memory test.”

The reason why doodling participants performed better could be two-fold according to the study. One of the theories is that doodling stabilizes arousal to an optimal level and thus preventing boredom.

The conclusion of the study: “Unlike many dual task situations, doodling while working can be beneficial.”

How Do Doodling And Sketching Benefit Idea Generating Groups?

In another study titled “How sketching can affect the idea generation process in design group Meetings,” by Van der Lugt, four idea generation meetings were studied and whether they had beneficial effects in a group dynamic.

The study came to the conclusion that sketching does support the creative process while idea generation in a group setting. The benefits of sketching are supported in what the authors call “the thinking sketch” and “the storing sketch” but not the “talking sketch.”

According to the study:

“Thinking sketches refer to the designers making use of the drawing surface in support of their individual thinking processes.”

“Talking sketches refer to designers making use of the (shared) drawing surface in support of the group discussion.”

“Storing sketches refer to the designers using the drawing surface to archive design ideas for their own future reference.”

What this means is that sketching is able to stimulate creativity by a process of re-interpreting people’s own ideas and then allowing access to the group to have that information or the re-interpretation of each other’s individual idea sketches.

I am fascinated by the idea that individual doodling and sketching of a problem and eventual interpretation and presentation to a group for further interpretation, building up and restructuring  is a potent creative advantage.

It seems to me from the study that this advantage happens by providing and bringing into the group’s awareness ideas that individuals have generated and into common aspects of memory of the problem that people share.

And finally in a study by Verstijnen and Hennessey titled “Sketching and creative discovery,” the authors describe the importance of Combining, Restructuring, Expertise and Creativity and their impact on sketching behavior.

“One day, the story goes, Archimedes jumped out of the bath and ran joyfully and nakedly through the streets of Syracuse. Finally,he had discovered the solution to a problem which had been bothering him. For a long time, he had wondered how to measure the volume of an irregular object. Obviously, the discovery came to him at a moment he had not anticipated. This aspect of discovery is more frequently encountered in anecdotal evidence and self-reports.”

However, the authors question this form of creative discovery by the famous “eureka” or the “falling of the apple” type discovery. Their studies show along with corroboration from artists and designers that not just mental imagery but also sketching has an important role in discovery.

The authors conclude that there is a distinction between combing and restructuring information. For example, combining is easier in the mind and mental imagery and not supported as much in sketching.

Restructuring on the other hand involves changing from one form or configuration another and is supported by sketching and difficult to accomplish in mental imagery.

The eventual goal of the study was to provide recommendations for computer tools for sketching. The authors recommend that the tools should be intuitive like paper and pencil and easy to use and with a low skill level requirement.

In addition, the tool needs to allow for some form of combining that passes fast and effortlessly and also allow for flexible switching or restructuring between various structural elements after creation.

And to conclude, the authors come back to Archimedes:

“Kekule and Archimedes needed time for the ‘sudden flash of insight’ to occur as well; they happened to recognize an analogy in an event that took place in their environment. Hence the tentative but straightforward suggestion is that sketching provides the analogies necessary to shorten the incubation period. To speak with Archimedes, the motto will be:Have a bath, but make a sketch before the water runs cold!”

So, doodle away to increase your problem solving and creativity skills and let me know in the comments below how sketching and doodling have enhanced your creative process?