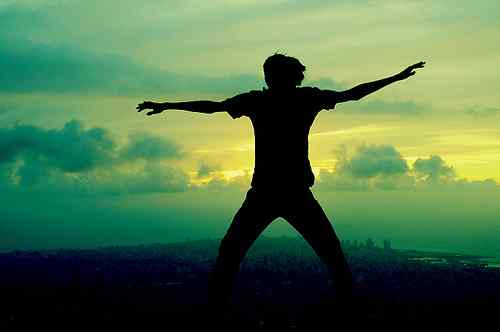 This is part 1 of the two part series on how to get beyond excuses.

If you are like me, you may have used all types of excuses in the past to avoid certain tasks or actions. We have all made excuses and put things off and felt bad about them later on.

The purpose of this post is not to blame or criticize the past in any way but to realize how excuses can paralyze our good intentions to act and move forward.

In retrospect, I now realize that when I was avoiding something or putting it off, I was making excuses and blocking a lot of amazing achievements and experiences to come into my life.

Excuses block our progress and prevent us from launching our life into great success.

Have you had these thoughts before?

If only I had…

I should do this but…

If only I could…

Habitual patterns of making excuses is the dis-ease of excusitis.

So how can you get over excusitis?

1. Realization that we make excuses

“I attribute my success to this – I never gave or took any excuse.” ― Florence Nightingale

The first step in getting over excusitis is the realization that we may be making excuses to rationalize why we do not want to do something. Becoming aware that there are only a few real limitations can make you see excusitis in a different light.

Moving forward in life without any excuses is a somewhat scary proposition.

I know this because in the past, I have made excuses for not doing what needed to be done.

I justified being stuck where I was because I found why something would not work or that it was a bad idea.

I did not make any attempt to question some of the automatic excusitis that I was engaging in based on my beliefs and environment.

Excuses can operate in very subtle ways in your life. If you have some underlying problems with doing a task, you may make excuses and justify them to avoid cognitive dissonance.

Action tip: Become vividly aware of the role of excuses in your life. We make excuses for all sorts of things and then rationalize why that is true for our situation. We do not question if the excuse has any basis or validity.

2. Successful vs. Unsuccessful: The No-excuses Link

“At the end of the day, let there be no excuses, no explanations, no regrets.” ― Steve Maraboli

Dr. David Schwartz in his book, The Magic of Thinking Big mentions that the major difference between successful and unsuccessful people is the ability to not make excuses.

According to Dr. Schwartz, unsuccessful people are constantly making excuses for why their life is stuck.

They make excuses for why they should not be going for it and assume a spectator’s role in their life rather than a participant role.

In my life, I have been successful whenever I called out on my own excuses and decided to go for it with a firm commitment.

I realize that in the instances I have been unsuccessful, I constructed stories why I would not be successful, made some really creative excuses and just stopped taking action.

Ironically, the excuses seem so real that you begin believing in them!

Action tip: Ask yourself if you can develop an attitude of not making any excuses for areas in your life that need improvement or attention. Instead of making excuses, decide to go for it! Meet the challenges and adventures of your life head-on minus the excuses.

Can you imagine what life would be if you decided to launch and take action towards your greatest dreams and aspirations?

“Never make excuses. Your friends don’t need them and your foes won’t believe them.”― John Wooden, Wooden: A Lifetime of Observations and Reflections On and Off the Court

According to Dr. Schwartz, there are many types of excusitis. The prominent ones are health, intelligence, age and luck.

Health excusitis manifests itself with the idea that our health is not ideal to follow our dreams and goals.

Dr. Schwartz says that the best way to lick health excusitis is to not talk or worry too much about our health and be grateful for what we have. He advises you to remind yourself often: “it is best to wear out than rust out.” I love that!

The second form of excusitis is one that many of us participate in without much analysis. You may convince yourself that you are not intelligent enough or do not have the brains to do something or be something.

Dr. Schwartz eloquently reminds us that we make a basic error in analysis. We underestimate our brain power and overestimate other people’s brain power. I agree with him completely. I think as we grow up, most of us confront poor role models or people who do not hesitate to remind us that we lack in intelligence.

The problem is that there will always be someone who appears more intelligent and comparison is a futile endeavor. The idea that you need a lightning fast mind and great memory is simply not true.

It is almost a tragedy that we forget our own great intelligence and rave about how everyone else is better than us.

To conquer age excusitis, the best method is to remind yourself that if you have the will and the desire to do something, age usually does not matter very much. Many young people have become very successful and older people in their 80’s have taken up martial arts and have gotten black belts.

Luck excusitis can be cured by reminding yourself that behind all the luck is years of preparation. For example, Malcolm Gladwell talks about the Beatles in his book The Outliers and how they played music in clubs for upwards of 10,000 hours before becoming an overnight success or having “gotten lucky.”

Action tips: Allow yourself to stop using health, intelligence, age and luck as an excuse to not go for your dreams and goals.

Look at examples of people with similar or more difficult situations and how they have cast aside their excuses and have taken action in their life.

Other factors such as perseverance, attitude, taking action and following through are of greater value than having a record breaking IQ.

Here is the summary of Part 1:

1. Become vividly aware of the role of excuses in your life. Question if the excuses have any basis or validity.

2. Success requires a no-excuses attitude! Instead of making excuses, decide to go for it!

Imagine how life would be if you decided to launch and take action towards your greatest dreams and aspirations?

3. Understand how we use health, intelligence, age and luck to make excuses and remain stuck in our own life. Find examples of people who have taken action, cast aside their excuses and created remarkable lives.

I still make excuses sometimes when I am confronted with difficult situations. However, my ability of recognizing those excuses and taking action has vastly improved over the years.

Here is a super inspiring video that always busts through my excuses and makes me take action!

Now I invite you to share your opinions! Do you feel like that you make excuses sometimes for not launching and putting your best work out there for everyone to enjoy?

Here is the link to Part-2.